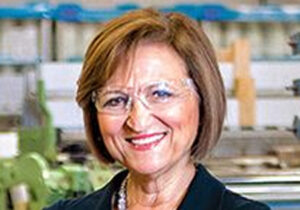 Maine’s economy depends on the success of businesses such as Auburn Manufacturing Inc. Unlike out-of-state businesses or multinational companies, Maine-based businesses are uniquely invested in their communities, their people and the future of this state. We provide quality, good-paying jobs, which help retain young people and generate local economic activity.

In February, the Maine Legislature held a public hearing for Senate President Troy Jackson’s “Buy American, Build Maine” legislation, which is supported by state Sen. Ned Claxton. The bill prioritizes Maine-based businesses and American manufactured goods for state contracts. Given that other states and countries give preferences to businesses within their borders, “Buy American, Build Maine” legislation only makes competitive sense. This legislation would level out the playing field for Maine companies while keeping taxpayer dollars within our state.

When I founded Auburn Manufacturing in 1979 with my business partner, it was shortly after the world had woken up to the dangers of asbestos. There was a clear gap in the market and we set out to fill it. At the time, manufacturing in Maine and across the country was at an all-time high – the “Rust Belt” was thriving.

Over the course of four decades, the manufacturing landscape has changed dramatically. Despite declines in output across the state and country, Auburn Manufacturing has continued to grow and thrive. Our products have evolved dramatically, and our markets have expanded beyond what we could have ever imagined. Auburn Manufacturing holds highly coveted contracts with the U.S. Navy and sells high-temperature, fire-resistant fabrics to more than 30 countries worldwide.

With 50 employees based in Mechanic Falls and Auburn, Auburn Manufacturing recognizes that producing a first-rate product begins with building a first-rate workforce. Our workers are an invaluable part of our long-term success, which is why we proudly offer comprehensive benefits packages and pay our employees good wages. That’s how we get results.

“Buy American” legislation is essential to keeping good-paying manufacturing jobs and businesses in the United States. At Auburn Manufacturing, we have seen, first-hand, how unfair foreign practices can close off the market and virtually wipe out an entire industry.

Through the past decade, I watched as approximately 30 percent of our business in silica fabric sales began to disappear to Chinese imports. It forced us to lay off valuable staff — the most difficult decision for any manager. We realized that these foreign companies, heavily subsidized by the Chinese government, were flooding the U.S. market and charging a fraction of the real price to manufacture the product. They were taking a loss in order to take over the U.S. market and put companies like mine out of business.

We are all for competition, but you need to play by the rules. What these Chinese companies were doing was illegal.

In 2016, we filed a lawsuit with the U.S. Trade Commission. One year later, we won. A medium-size company in Maine took on China and won — an unprecedented victory for America’s manufacturing sector.

Yet we still need to do more to promote and support American-made products, including Maine-based companies. After all, Maine’s manufacturing sector accounts for more than $6.3 billion in annual economic output — about 10 percent of our state’s entire economic output. At the same time, we support roughly 52,000 manufacturing workers — more than 8 percent of the state workforce.

Understanding our economic impact challenges us to work harder, as does our competition — at home and abroad. Our competitors push us to think creatively, embrace new opportunities and go the distance.

Competition is good for business. What we are asking for is a fair chance to compete for state contracts, because we know we can win.

“Buy American, Build Maine” legislation gives us, and all Maine-based businesses, a fair shot. It is pro-business, pro-worker and, most importantly, pro-Maine.

Kathie Leonard is president and CEO of Auburn Manufacturing Inc.