Auburn Manufacturing, Inc. (AMI) welcomes the June 28, 2016 preliminary determination by the U.S. Department of Commerce (DOC) that Chinese manufacturers have been illegally subsidizing 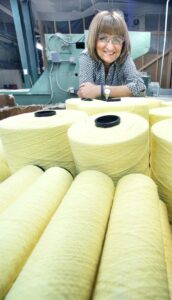 certain amorphous silica fiber (ASF) used to insulate and resist extreme heat in industrial applications.  The subsidization of these imports allows Chinese producers to sell ASF at artificially low prices in the U.S. market, unfairly undercutting U.S.-made products. To combat this illegal subsidization, the DOC has imposed provisional duties ranging from 4.3 percent to 104.1percent, depending on the exporter.

Kathie Leonard, President/CEO of AMI called the imposition of provisional duties an encouraging sign that the DOC and the International Trade Commission (ITC) will continue to pursue these illegal trade practices. “This is just the beginning,” said Leonard. “Although these initial countervailing duty (CVD) margins show that Chinese exporters are receiving subsidies, we believe the final determination will yield even higher subsidy rates.  China must be held accountable.  It is using unfair trade practices to tilt the playing field against American workers and businesses.”

The imposition of provisional duties is the latest step in ongoing countervailing duty (CVD) and anti-dumping (AD) investigations.  These investigations were launched in response to a pair of petitions from AMI seeking countervailing duties to remedy the adverse effects of the Chinese government’s alleged subsidization of its ASF producers and antidumping duties to combat unfairly low pricing by Chinese exporters.  In its January 2016 petition, AMI claimed that its profitability and growth potential has been negatively affected by Chinese trading practices that allow producers to sell ASF at artificially low prices.

Preliminary findings of the anti-dumping (AD) investigation have yet to be announced. “When the DOC announces its anti-dumping determination,” said Leonard, “we expect it will result in further significant duties on Chinese ASF.” She added that while product dumping is both unfair and illegal, it can also be dangerous. “Product dumping that leads to tragedy is not a new concept,” she said. “We’ve seen the consequences of Chinese tires, pet food, and toothpaste. At best, the quality of ASF from China is inconsistent and buying from a U.S. supplier does not ensure it’s a U.S. product.”

Final determinations of both investigations are scheduled for early November 2016. For both AD and CVD duties to be imposed, the U.S. government must determine not only that dumping and/or subsidization is occurring, but also that there is “material injury” (or threat thereof) by reason of the dumped and/or subsidized imports.  That determination will be made in January 2017.