About Us/News/General/AMI’s President & CEO, Kathie Leonard Featured on CNBC – A Follow Up on Anti Dumping Case 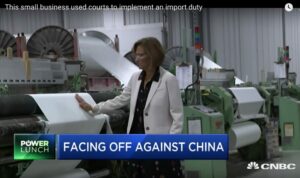 It has been just over a year since Auburn Manufacturing won its battle against Chinese manufacturers who were dumping heat-resistant industrial textiles into U.S. markets.  CNBC recently interviewed AMI’s s Kathie Leonard as a follow up to that action.  View CNBC Interview.

Since 1979, Kathie Leonard has run Auburn Manufacturing, a small company that makes heat and fire-resistant fabrics for industrial use. Leonard has two facilities in Maine, selling to heavy industry businesses in oil, petroleum, shipbuilding, and even the U.S. Navy.

About four years ago, Leonard began losing sizeable contracts. In fact, she watched about 30 percent of her business in silica fabrics disappear. She began to investigate why, and came to find out a similar product was being imported from China and sold to her competitors for up to 30 percent less than Auburn’s price.  Read More of the CNBC Interview with Kathie Leonard.