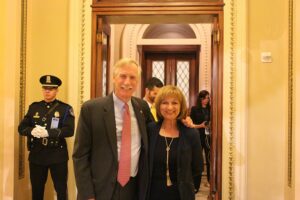 Kathie Leonard, President and CEO of Auburn Manufacturing, joins Sen. Angus King (I-Maine) outside the House Chamber in Washington, D.C. prior to attending the State of the Union Address.

Mechanic Falls, ME – When President Obama delivered his 2015 State of the Union Address in Washington D.C. one of the people seated in the gallery of the House Chamber was Kathie Leonard, President and CEO of Auburn Manufacturing (AMI).  She attended the January 20th address at the invitation of U.S. Senator Angus King (I-Maine), a strong supporter of the American manufacturing sector. Leonard is the founder and owner of AMI, the Maine manufacturing company that provides high-temperature textiles to the petroleum, shipbuilding/repair, power generation and metal-making industries as well as its patented Ever Green® modular insulation products for greening up mechanical rooms by insulating valves and fittings found in institutional, healthcare and government facilities.

“It was a thrill of a lifetime to attend this important event, and to be recognized as a contributor to the US economy by Senator King,” said Leonard. “Long before coming to Washington, the Senator’s reputation as a visionary leader was well known in Maine. He understands how important a strong US manufacturing base is to our nation’s stability. I’m proud to know him, and to have lived and worked in the State of Maine for over 35 years – proof that quality of life and business success are compatible.”

Unlike other companies that joined the off-shoring trend of the last decade, AMI took the road less traveled and kept AMI in Maine, employing 50 people between its Auburn and Mechanic Falls manufacturing plants. “Kathie’s story of hard work, innovation, and perseverance is a blueprint for how American producers can compete in an increasingly global marketplace,” said King.  “She has managed to keep jobs here in the U.S., and under her steadfast leadership, AMI has proven that manufacturing can thrive in Maine.”

Leonard said she is proud that AMI led the evolution toward standardization in the industry, being first to embrace performance-based testing and third-party certification of its products.  AMI now exports products to over 35 countries and occupies the #1 position in existing markets. When asked to comment on President Obama’s renewed call for fast-tracking free trade agreements with Asia and Europe, Leonard said she agreed with the President that past deals haven’t always lived up to the hype. “There’s a lot of enforcement that still needs to take place with free trade,” she said. “However, given a level playing field, I believe small businesses like ours can benefit by new trade partnerships, creating more US jobs.”

In his continuing support of the American manufacturing sector, Senator King co-sponsored the Revitalize American Manufacturing and Innovation Act of 2014, which was signed into law in December 2014.   It directs the Department of Commerce to establish a network of regional Centers for Manufacturing Innovation that will bring together industry, universities and community colleges, federal agencies and all levels of government to accelerate manufacturing innovation in technologies with commercial applications.

Auburn Manufacturing, Inc.
Since its founding in 1979, Auburn Manufacturing, Inc., has become a leading developer, manufacturer, and marketer of textile products for hundreds of extreme temperature industrial applications throughout the world, including welding protection, industrial insulation, safety apparel, gaskets and seals, and other MROP (Maintenance, Repair, Operations and Production) and OEM (Original Equipment Manufacturer) applications.